Brought to you by three decades of STUPID women "lawyers"

"To my considerable chagrin, we found that at least 60 percent of all the rape allegations were false."
- Dr. Charles P. McDowell, Supervisory Special Agent, U.S. Air Force, Office of Special Investigations

Take what Charles McDowell had to say in the June 1985 issue of Chicago Lawyer about the number of rape accusers who lie, here being interviewed by Rob Warden, the editor: 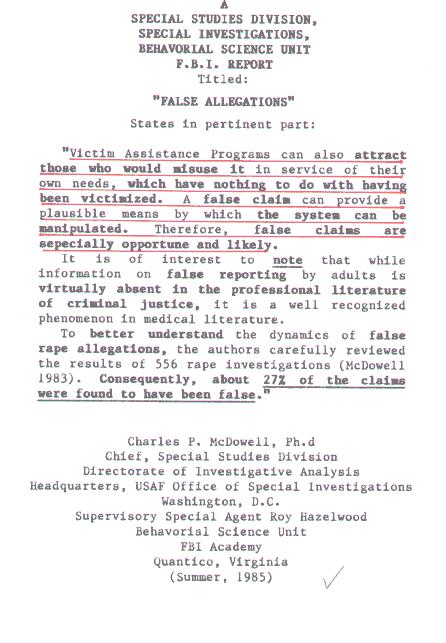 Charles McDowell, the subject of this interview, is an experienced Air Force Criminal Investigator and has been called "probably the world's leading expert on false rape accusations."  He has stated that falsely accusing a man of rape is a crime as reprehensible as rape itself and that the former happens about as often as the latter. With false rape allegations as high as 25% and higher there is a serious problem. The media must educate the public to the true statistics instead of the now discredited ones feminists cite when talking about the percentage of false reports."  Assuming the worst case scenario for these 92,490 reported rapes:

Of  92,490 rapes reported each year, there are 23,122 women who are admittedly guilty of lying, 23,122 women who are probably guilty of lying,  5,187 women whose testimony conflicts with scientific DNA testing, 5,187 men whose DNA does not match the evidence at the "crime" scene, 5,187 men whose DNA evidence did match but whose convictions must be reexamined because of the high rate of false convictions of those whose DNA did not match,  and 5,187 probably guilty men, .  The same standard of proof applied to women for filing known or suspect false police reports, as is applied to men for acts which are impossible to either prove or disprove as crimes, and imprisoning women at the same rate as men for equally as serious crimes, would result in five times as many women as men in prison each year -- 51,431 women versus 10,375 men.

Using this 'equality' criteria, we have PROOF that 51,431 women are felons, while we only suspect that 10,375 men are.  Yet 15,562 men were imprisoned -- and NOT a single woman was!   What does the most damage?  A "date rape" perceived by hysterical feminists be a "violation" of a woman's rights, or a genuine false rape accusation which destroys a man's reputation, costs societ billions of dollars in tax dollars, and results in thousands of fase imprisonments? Does an apparently unwanted act of sex damage a woman more than a blatantly false charge of rape does a man?  If a woman has no bruises or permanent physical injuries, and only believes she has been raped  because she applied the new "feminist logic", then the most she can claim is some unverifiable psychological damage, at best, and 99% of  the time she can get on with her life.  But 28,309 women were known to have damaged a man worse than she could have been damaged had all the charges been true.  The same standard of proof applied to women for filing false charges as is applied to men who are falsely convicted would reveal that 51,431 men are known to have been unnecessarily and permanently damaged by women.

The evidence is far from 'equal'.  More evidence exists of the damage done by 51,431 women than the evidence that was available to convict 15,562 men.  This evidence sits in police files while the police and the  district attorneys and the judges do nothing .  Charging and convicting possibly innocent men on such a massive scale while ignoring the role played by unscrupulous women encourages more of this behavior, trivializes the serious crime of rape, overburdens the 'system' with frivolous complaints, causes real rapes to be overlooked or ignored, and trivializes legitimate rape charges made by honest women.

In the US military, there is not the legal prohibition against the use of lie detectors that there is in civil law. Some women forgot that, though it makes one wonder, considering that civilian women know they wont have to face a lie detector, what the percentage would be amongst civilians?

"To my considerable chagrin, we found that at least 60 percent of all the rape allegations were false." - Dr. Charles P. McDowell, Supervisory Special Agent, U.S. Air Force, Office of Special Investigations

"The Lace Curtain’s power exists even in male-dominated institutions. For example, Dr. Charles McDowell, formerly of the US Air Force’s Office of Special Investigations, discovered that 27% of Air Force women who claimed they had been raped later admitted making false accusations of rape.[12] The admission usually came when they were asked to take a lie detector test. With these admitted false accusations he was able to develop 35 criteria distinguishing false accusations and those known to be genuine. Three independent judges then examined the remainder of the cases. Only if all three reviewers independently concluded the original rape allegations were false did they rank them as “false.” The total of false allegations became 60%.

Rather than publicize the study as an antidote to the Tailhook scandal, the study was buried. Dr. Charles McDowell was ostracized and moved– the Air Force equivalent of being sent to Siberia."

An interview with Dr McDowell showing that a FALSE finding was not found unless absolutely certain, can be read here: http://www.mens-network.org/mcdowell.html