Take five minutes to complete the Poll on Exiling Blacks 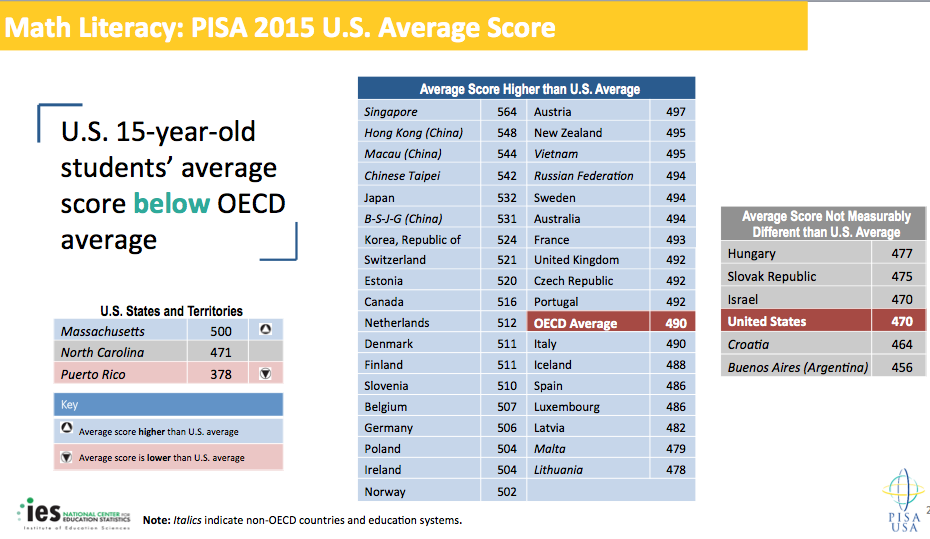 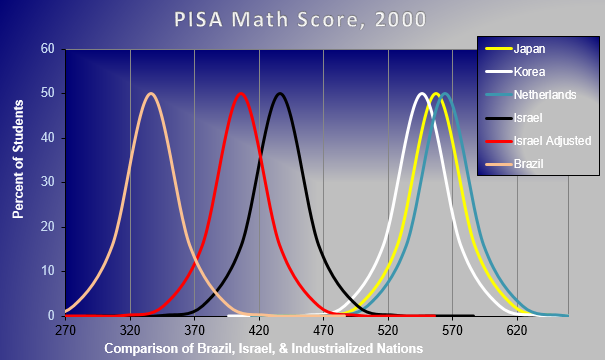 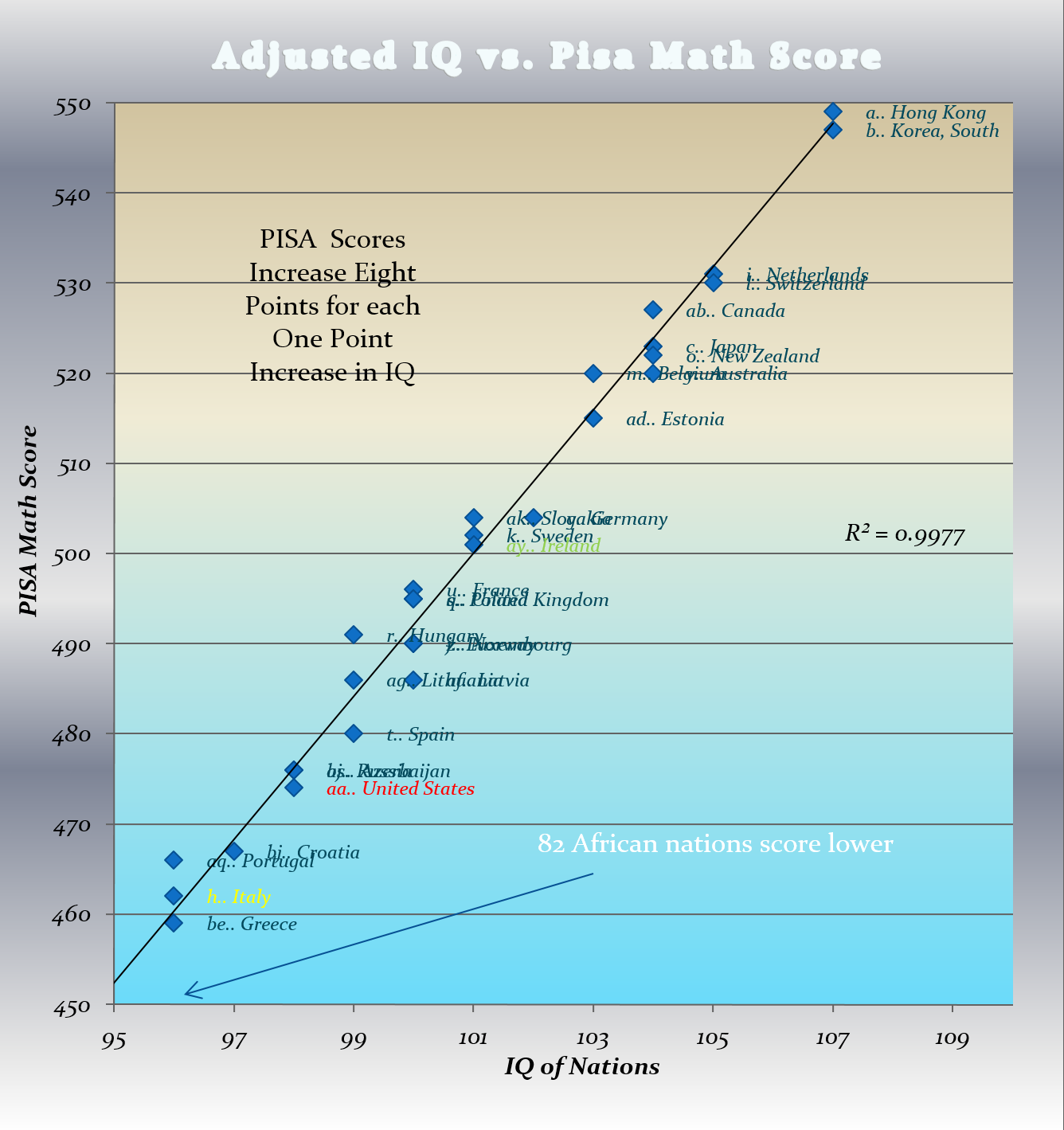 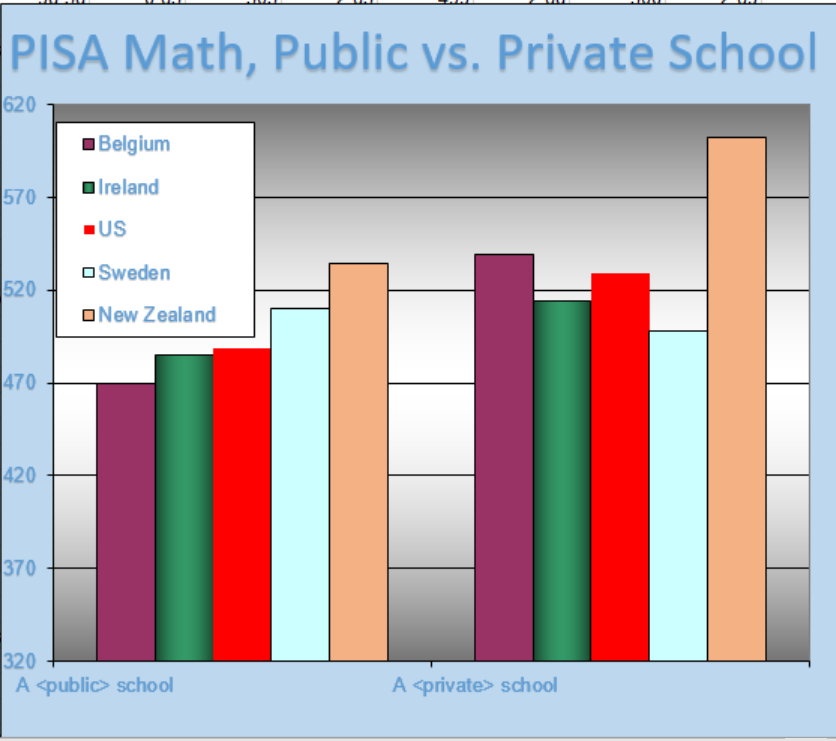 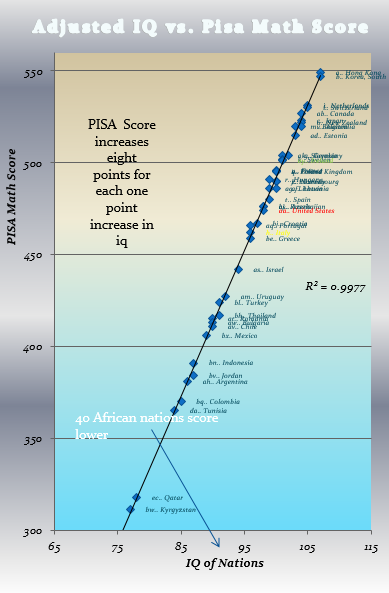 
Not even RACE explains OUR MISERABLE score!: 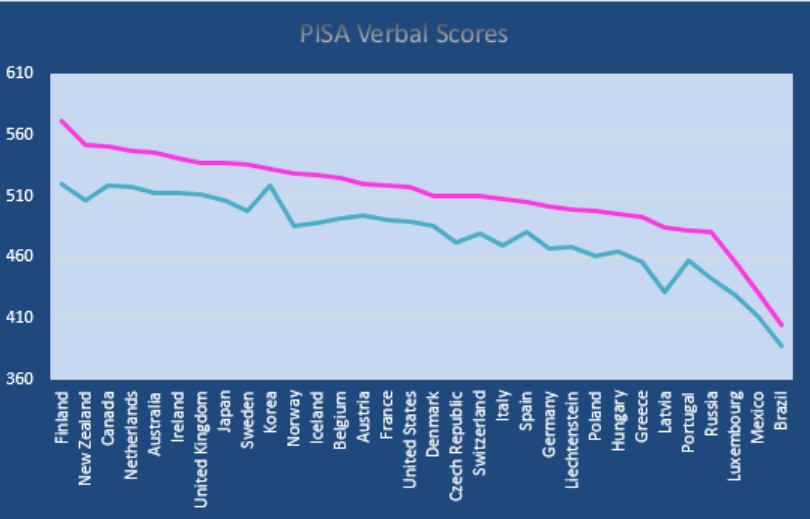 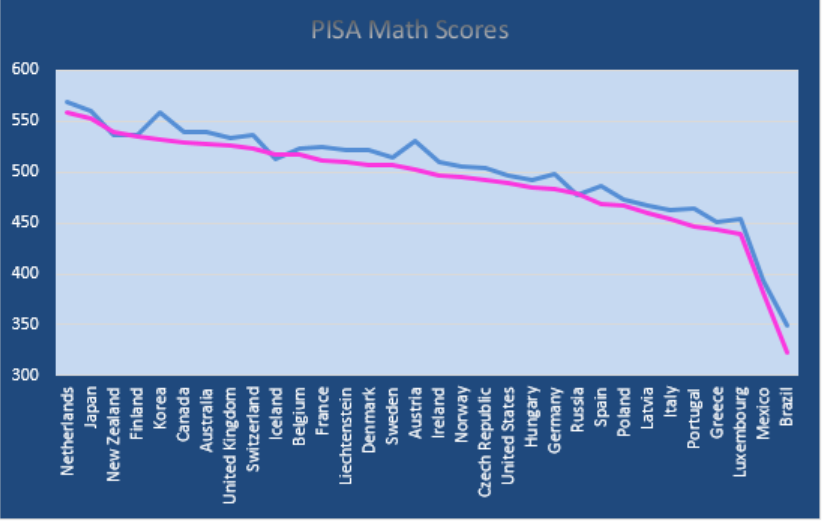 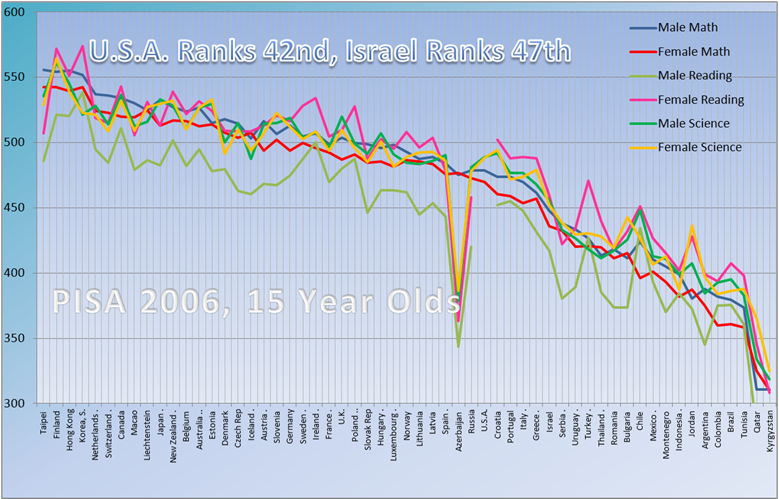 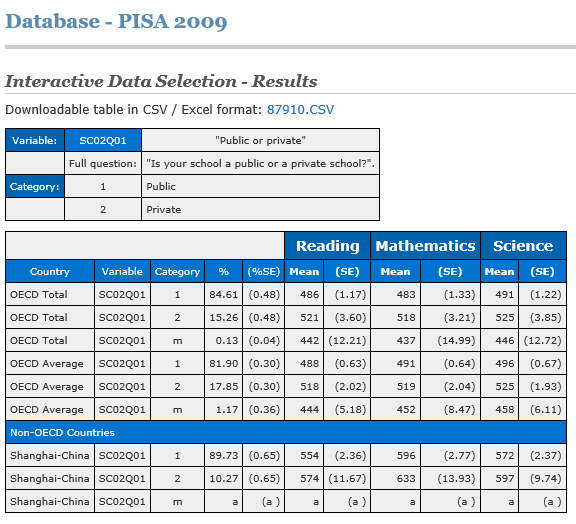 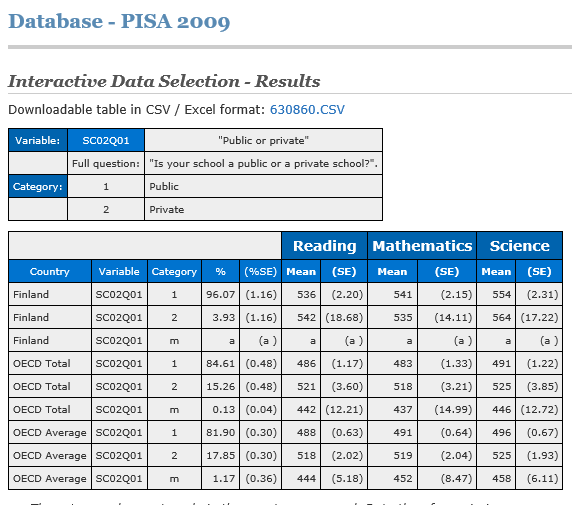 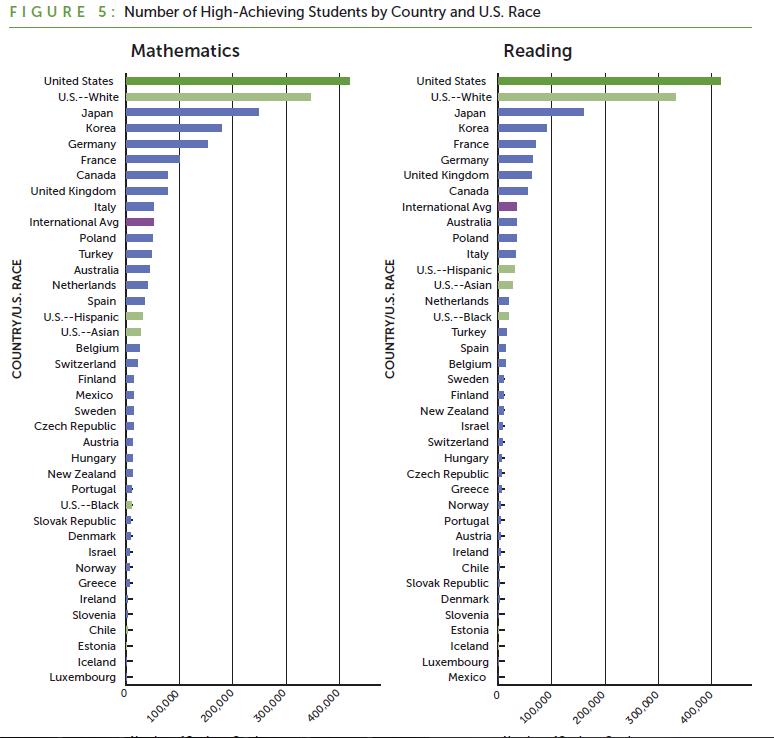 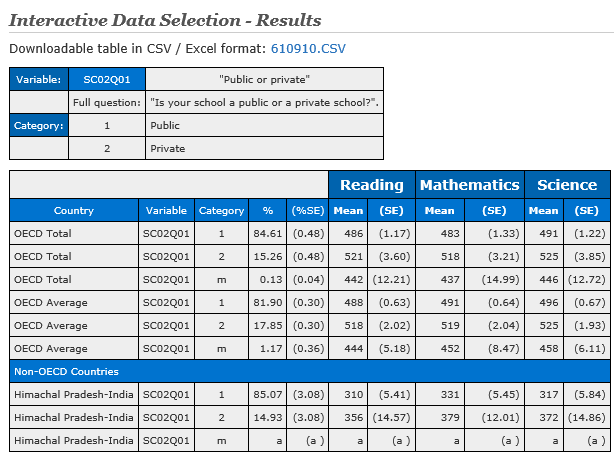 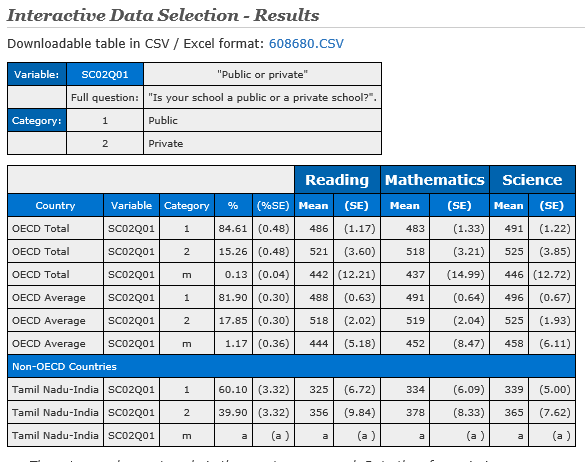 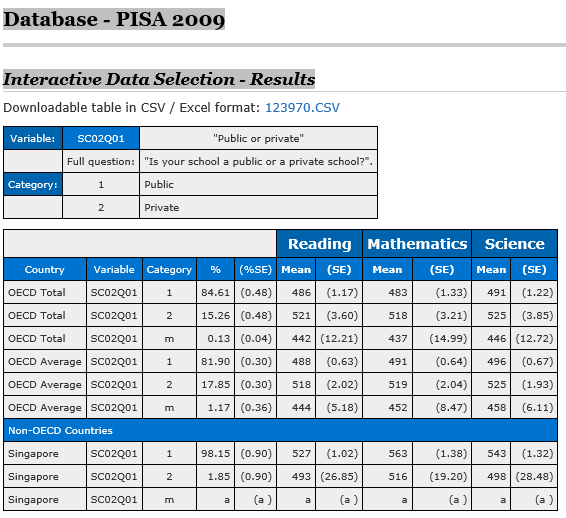 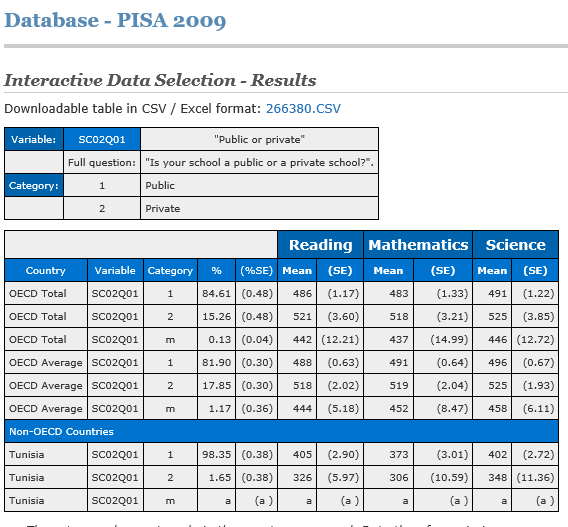 If jews are g-d's chosen race, then what does that make the above races and nations: superhumans?

The few third world nations which Israel scored higher than can hardly impress us.  What did "g-d" choose this race for, anyway: destruction? "Israel" where 100% of those who took this test were "jews" scored 34 points lower than Azerbaijan which is 98% Muslims. 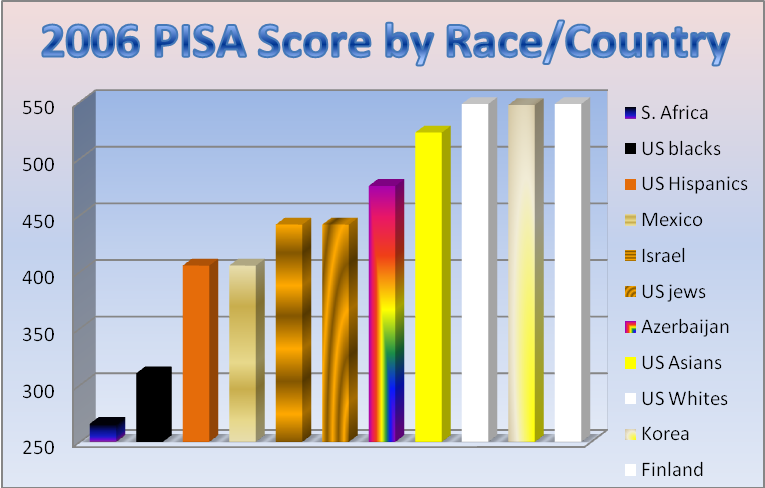 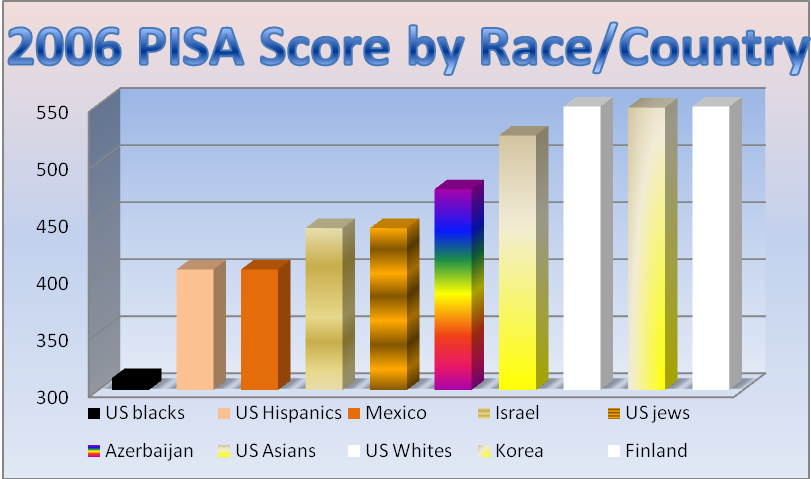 The only way to rationalize this is if American blacks scored 276, 25 points lower than the lowest PISA score:

If American blacks did score in the range of South African blacks, our estimated PISA score would be 5 points too low. [However, if American Hispanics scored in the range of Greece or Italy rather than Mexico--not an impossibility--then our predicted score is exactly what the score was]. 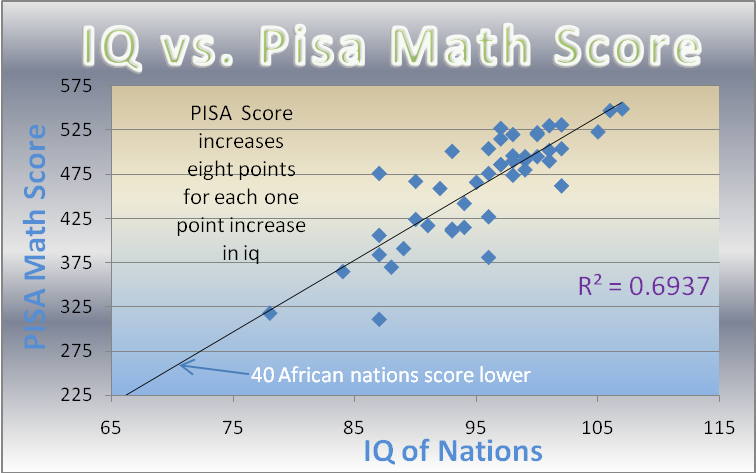 The above IQ data is from Professor Lynne, and there are a number of reasons to be suspicious of it:

Making the following adjustments produces an r-squared of almost 1.0:

How can we justify raising Ireland's IQ by 8 points.  Ireland almost always scores on the international tests at the same level with other countries who Professor Lynne estimates have IQs from 101 to 105.  Ireland now has one of the highest average incomes in the world.  It's hard to believe their IQ's are equivalent to Italy or Greece.

How can we justify raising Russia's score 2 points?  This data point seems to be left over from Cold War Propaganda, plus most of the points above.  Russia also scores higher than Ireland on some tests, so this is very conservative.  How can we justify decreasing Argentina's and Kyrgystan's IQ by 10 points?  Just like with PISA, neither country has ever done that well on any international tests. 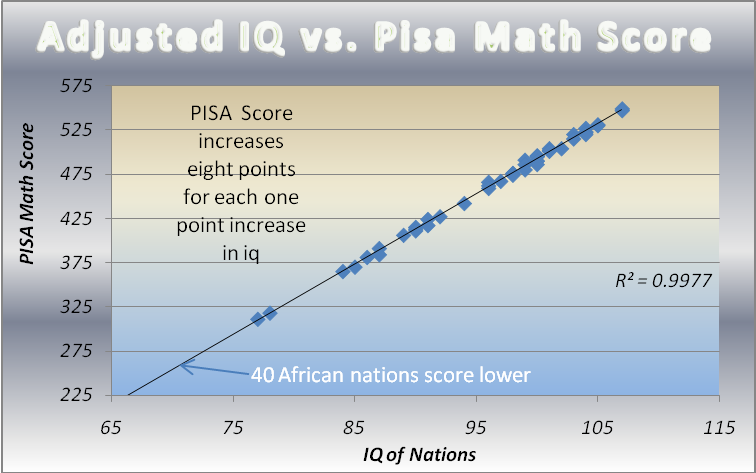 Once these adjustments are made, we see that IQs increase 1 IQ point for each 8 point increase in PISA scores.

This is also consistent with the most recent edition of PISA. 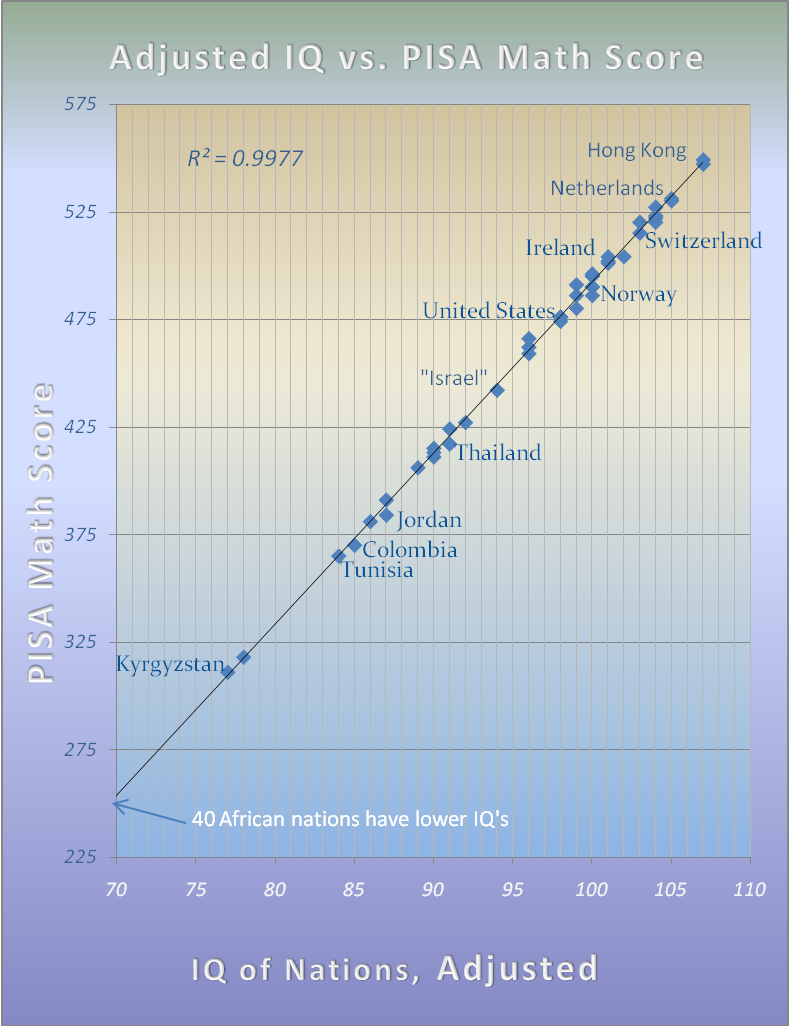 There's a remarkable, but expected, correlation between PISA reading scores and Professor Lynn's IQ, by country, producing an r-squared of about 0.7: 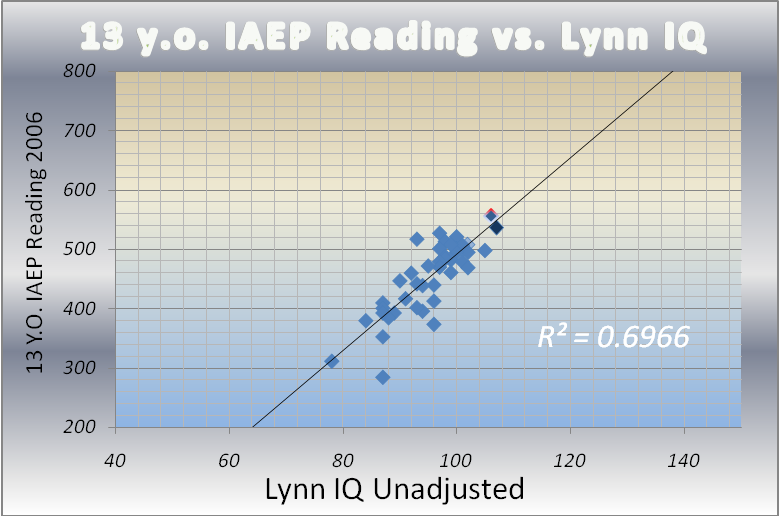 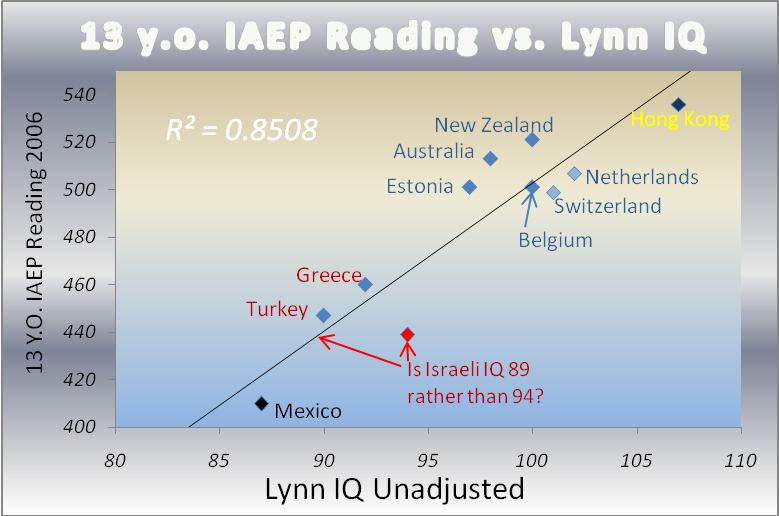 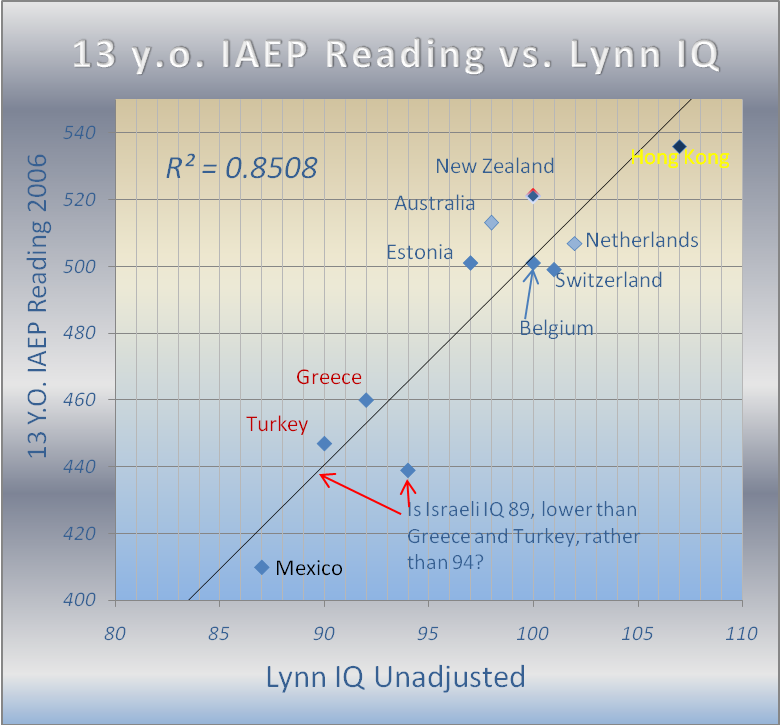 OUR DISMAL PISA SCORE WAS PREDICTABLE, AND EXPECTED

Did anyone score lower?

Why did Poland score only 470, which is 99 points lower than the Netherlands?  The same reason Miami-Dade County, Florida: Rochester, NY; Chicago, Illinois; and Jersey City, New Jersey scored dead last in the US in TIMSS and why Israel scored so low. 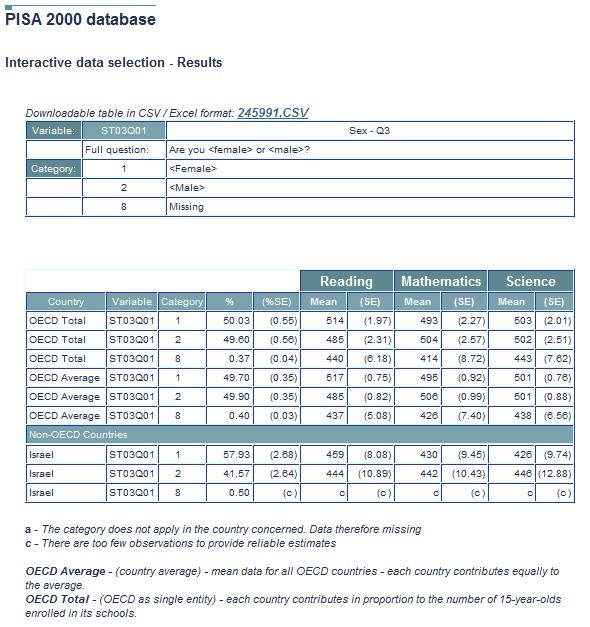 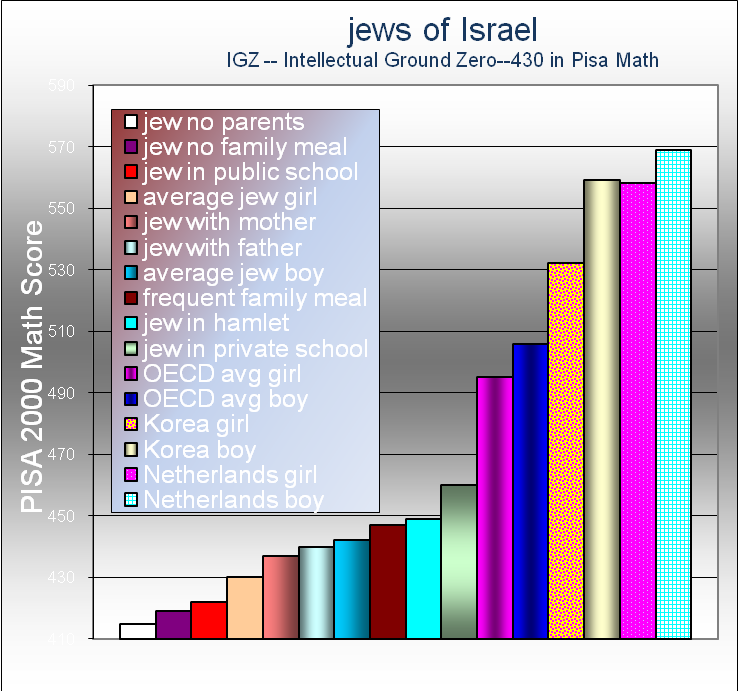 OUR DISMAL PISA SCORE WAS PREDICTABLE, AND EXPECTED

The dismal score of 489 "achieved" by the US, whose education system motto is "pursuing excellence" rather than "muddling with mediocrity", was easily predictable from prior test scores like those from GRE and TIMSS.  It would be expected that Asian boys in the US should score in the range of Japanese boys, or 561.  As Asian males are 2% of the population, their contribution to our national average score is 561 x 2% = 11.22.  Also true for Asian women, 553 x 2% = 11.06.  While White boys in nigger-free, latrino-free, jew-free North Dakota score considerably higher than all other states (100 SAT points higher than boys in New Jersey), and thus may score even higher than the Netherlands, White boys across the country averaged 549, a score lower than the Netherlands of 569, but higher than Flanders of 543.  As White men are 35% of the population, their contribution to the national average is 549 x 35% = 192.15.   The 11 point lower score for White girls (who are 35.1% of the population) of 538 is equivalent to the sex differences in other countries, 538 x 35.1% = 188.84.

The class of students who really drag down our scores are the niggers who constitute 12.5% of the US population, particularly nigger girls who scored 404 on GRE Quantitative, 234 points lower than Asian boys.  Such a low score on GRE suggests that they score even lower than the Mestizos of Peru who share a common mixed-race ancestry.   But if we use the Peruvian scores to represent American nigger boys, we get 301 x 6.25% = 18.81, and for nigger girls we get 285 x 6.25% = 17.81.

The total of the above calculations is 489.09, durn close to the 489 score reported by PISA:

As poorly as the US did on this test, the gap between the public schools of Israel and the US of 22 generations suggests that NO jews scored in the range of the lowest scoring American students. 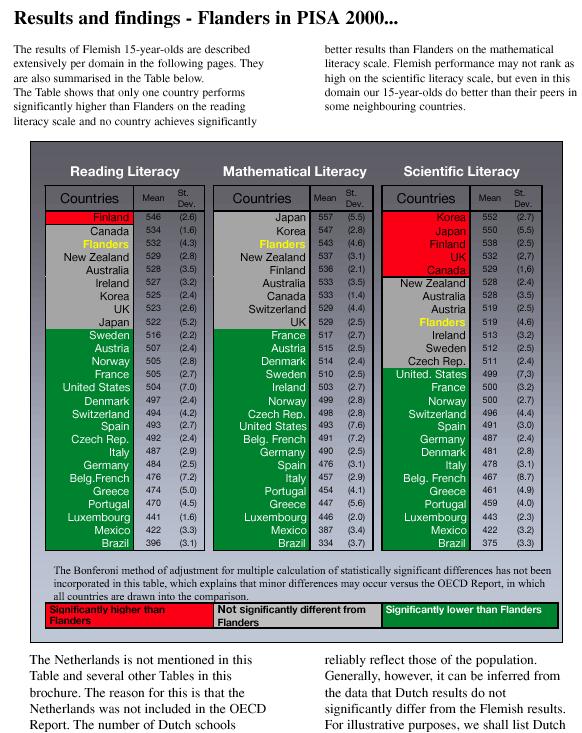 These are the results of the PISA test which show the US scores 8 generations lower than Japan in math:

ANOTHER WAY TO MEASURE GENERATIONS

The chart on page 59 of the above Adobe document reports the following:

Muds in all countries scored remarkably lower than Whites in those countries, as well as Whites in every other country.  The 288 point spread between the lowest scoring mud in Peru of 285 and the highest scoring White in the Netherlands of 573 represents the vast majority of the intellectual spectrum measured by PISA.

The 52.3% of Brazilian boys who scored lower than 358 are represented primarily by the 38.5% who're mulattos, 6.2% who are blacks and 1.6% who are of other unspecified races.  While the CIA estimates that 53.7% of Brazil's population "are White", the simple fact that only 0.3% scored over 668 (compared to 15% in Liechenstein, Switzerland, Czech Republic, and Denmark, more than 17% in Hong Kong, Japan, and Korea, and more than 10% in Austria, Belgium, New Zealand, and the Slovak Republic) proves that the "Whites" from Portugal who populated Brazil who had already miscegenated with blacks, Moors, and jews prior to their expulsion in 1492, are from the lowest intellectual strata of Whites.  In Europe, however, Portuguese and Spaniards are not considered Whites, and recent DNA studies show that they are 25% Negroid and 25%

"After 500 years of active miscegenation, the 'white' population of Brazil has been reported to have a lot of Y-chromosomes of European origin, but the maternal contribution, estimated from mtDNA, has over 25% of gene markers from each of American Indian and Black African origin"

Almost half of the boys from Tunisia, one of the lowest scoring countries, scored lower than 358, proving the presence of a large black influence in a population which the CIA estimates to be 98% Arab and 1% European.  However, similar to Mexico, Brazil, Indonesia, Thailand, and Uruguay where less than 1% scored over 668, zero percent of Tunisian boys scored over 668 proving that any Europeans there also came from miscegenated nations.

The 36.1% of Mexicans who scored lower than 358 are made up primarily of the 30% who the CIA estimates are Amerindian.  The 60% who're mestizos [read: have some Spanish blood] are primarily the 27.1% who scored between 358 and 420, and the 21.5% who scored between 421 and 482.  The fact that only 4% of Mexicans scored over 545 suggests that the 9% who're listed as "White" are actually Hispanics whose ancestors in Spain had also mixed with blacks, Moors, and jews prior to their expulsion in 1492, just as they had in Portugal.  To add insult to injury, Mexico was one of the few countries who scored lower in 2003 than they did in 2000 (382 vs. 400) suggesting that their future is ever more muddy.

While "the Greek Government states there are no ethnic divisions in Greece", the simple fact that a fifth of Greek boys scored lower than 358 and 6% scored higher than 607 (one of the largest spreads in PISA test scores) suggests ethnic divisions of monumental proportions.  No other country which has such a large percentage of its population scoring lower than 358 (such as Mexico, Turkey, Brazil, Indonesia, Sebia, Thailand, Tunisia, and Uruguay), had such a large percentage of its population scoring over 607.  The official stance of the Greek government might be just like the political objective of the US, to wipe out ethnic divisions, but the 6% who scored over 607 are pure White descendants of the Greeks who built structures like the Parthenon 2,500 years ago which modern day Greeks, two thirds of whom scored lower than 482, can't even repair, much less design and build.

The Greek government might consider it noble to attempt to narrow the racial divide, but is it at all possible that the Whites in Greece would today be scoring as high as the Whites in Austria, Belgium, the Czech Republic, New Zealand, Slovak Republic, Switzerland, and Liechenstein, where more than 10% scored higher than 668, if it weren't for this misguided social policy?  Might it be possible for Greece today to repeat something it did 2,500 years ago before they miscegenated their race and then declared "there are no ethnic divisions in Greece"?  Can people, two thirds of whom have math skills which are on par with Mexico and Brazil and thus have no choice but to be common laborors, even earn enough money to pay the taxes to build something that the 6% who scored over 607 are capable of designing?

By declaring that "there are no ethnic divisions in Greece", the Greeks set themselves on a course which will make them all look like Mexicans soon enough, scoring 104 points lower than the Swiss (437 vs. 540) who do recognize God's natural order and His divisions of races, and only 55 points higher than the Mexicans (382) who don't.

The CIA estimates that 7.2 million of Germany's population of 84.3 million, or 8.6%, are foreigners, with most of them being Turks.  Such a large Turkish population, 28% of whom scored lower than 358 back home in Turkey, is why 10.6% of boys in Germany scored lower than 358, while 7% of German boys scored higher than 668.  The German government does not declare that there are no ethnic divisions, but rather declares that there IS, and never grants citizenship to the foreigners living in Germany except in the rare event that they are of German ancestry.

There are three possibilities for why a student who uses cellular phones scores 27 points lower than one who doesn't:

Is it possible that a Dutch boy who has computers at home, uses them several times per month, uses the internet several times per week at school, and has no cellular phone, can score 643?  Of course.  Would such a student always score that high? Of course not.  Would such a student score another 20 points higher just because his school has poor utilities?  No.  But there certainly are Dutch students who COULD score that much higher, at 663, who meet all of these conditions.

This is not to say that the Dutch student who's a boy whose father completed college, with no cellular phone and a classroom which is cold in the winter and hot in the summer, with poorly stocked libraries and teachers who're abundant but not absent, who attends operas and uses the internet and computers, whose fellow students respect teachers and don't disrupt classes, AND is BORED by school, will ALWAYS be the highest scoring student--but PISA proves that this is the profile of the BEST Dutch student, and probably students in every other part of the world.

Even Professor Lynn claims that Ireland's IQ is only 89, and another poster observed:

Since Ireland ranks 7th and we rank  24th on PISA Reading (523 vs. 498, a 25 point difference), and since each one IQ point is equivalent to 8 PISA points, that must put the US at an IQ of only 86.  Is this at all possible? Has our education system really sunk this low?

We also scored 20 points lower than Ireland in math and 25 points lower in science, further evidence [proof?] of our 3 point IQ deficiency with Ireland.

PISA 2012 was presented on 3 December 2013, with results for around 510,000 participating students in all 34 OECD member countries and 31 partner countries.[8] This testing cycle had a particular focus on mathematics, where the mean score was 494. A sample of 1,688 students from Puerto Rico took the assessment, scoring 379 in math, 404 in reading and 401 in science